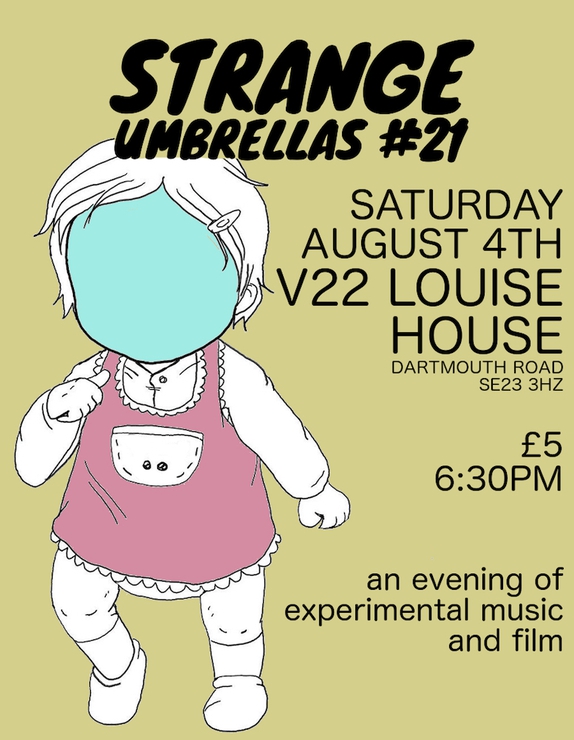 Solo: Jack Goldstein
Jack Goldstein makes Experimental Lo-fi Power Pop/Emo. His latest record, entitled ‘Sandwiches’, is a Brian Wilson-esque song-cycle set in an imagined interzone near the Oxford that Goldstein grew up in. He is also a musicologist and academic at Goldsmiths University and was awarded the Bob Gilmore Prize for Outstanding Work in Musicology for his dissertation on the influence of politics and brass bands.

Duo: Daniel Spicer/Paul Khimasia Morgan
Daniel Spicer is a writer, broadcaster, improviser and poet based in Brighton, UK. He writes about music for The Wire and Jazzwise magazines. His book on Turkish psychedelic music, 'The Turkish Psychedelic Music Explosion: Anadolu Psych 1965 to 1980', was published by Repeater Books in 2018. As an improviser, he has worked with artists as diverse as Adam Bohman, Dylan Nyoukis, Alan Wilkinson and Konstrukt.

Charlotte Keeffe performs regularly across the UK and internationally as part of several ensembles. Fascinated with improvised music, Charlotte helped guitarist John Russell establish the Mopomoso Workshop Group. Charlotte performs as a trumpet/ flügelhorn soloist and as part of her trio, Space Painters, with guitarists Joe Smith Sands and Diego Sampieri. Charlotte also has a new quartet project and will be releasing her debut album featuring some of her original compositions very soon…

Max Hattler is an artist and academic who works with abstract animation, video installation and audiovisual performance. He holds a master's degree from the Royal College of Art and a Doctorate in Fine Art from the University of East London. Max has performed live around the world including at Playgrounds Festival, Re-New Copenhagen, Expo Milan and many others. Max's current research focuses on synaesthetic experience and visual music, the narrative potential of abstract animation, and expanded artistic approaches to binocular vision.

Duo: Blanca Regina/Anavaca
Blanca Regina is an artist, teacher and curator based in London. Her research and practice is heterogeneous and encompasses expanded cinema, free improvisation, graphic and moving images, photography and performance art. In 2014 she became a lecturer at the  School of Music and Fine Art at the University of Kent. She has performed with various artists, including Terry Day, Leafcutter John, Steve Beresford and Matthias Kispert and has curated a number of events and installations in London and internationally.

AnavacA is a multifaceted communicator who expresses herself through arts and therapy. She has participated in various healing performances and psychomagic projects. She developed, with her hands and her voice, regression processes and has collaborated with artists and therapists for 20 years. She currently lives between Malaga and London.

1 - Soramimi
2017 / 3’32 / 4:3 / Sound
Soramimi taps in to the rhythms of the forest, channelling the positive and negative energies through the red and blue masks and eventually creating an abstract piece of ritualistic occurrence. It was all shot on Super 8 in the mountains of Japan (Kanazawa, Nagano, and Yakushima Island) and features music by Grimm Grimm.

Julia Laird is a Scottish photographer and director based in London. She uses both digital and analogue photography and moving image to cover the areas and people around her, both in her home country and whilst travelling further afield.

Daisy Dickinson is a London-based director and visual artist whose work involves experimental short film, music video, projected installation and live visual performance. She is one half of the audio/visual collaboration ‘Adrena Adrena’, with ex-Boredom’s drummer E-da Kazuhisa, and  is currently working as a visual addition to Seefeel, Grimm Grimm & Samuel Kerridge.

Anyone under the age of 16 years old must be accompanied by an adult.